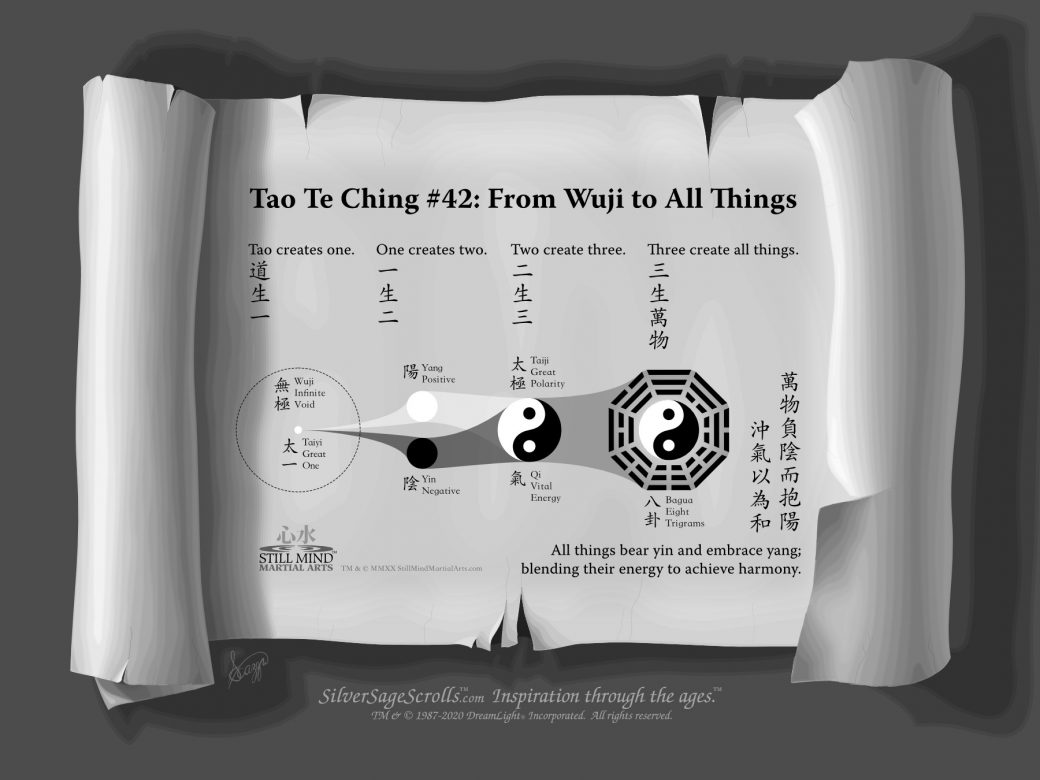 Wu Chi (or Wuji, pronounced Woo Jee) means without limit, limitless or infinite. It also means without pole or without polarity. It denotes the infinite void before the existence of anything else.

The following is not presented as authoritative in any way, but rather simply as interesting observations and curious explorations of similarities between theories across the millennia.

道 In Taoist philosophy the primordial universe was an undifferentiated infinite void, without polarity. This undifferentiated state is known as Wuji. Wuji gave rise to the two polar opposite forces of Yin (negative) and Yang (positive). This newly differentiated state is called Tai Chi (or Taiji, pronounced Tie Jee) which means supreme polarity. The interaction between these two forces of Yin and Yang gave rise to a third force called Ch’i (or Qi, pronounced Chee) which means vital energy or life force. The Ch’i then regulates and balances the interaction of Yin and Yang and gives rise to everything else.

The Tao Te Ching (Tao & Virtue Classic) is the foundational Taoist manuscript written by Lao Tzu, in the 5th or 6th century BC. Chapter 42 contains a description of this Taoist cosmology paraphrased as:

What I find so fascinating about this is that with nothing more than meditation and intuition, the ancient Taoists conceived of ideas that are eerily similar to theories of modern science that wouldn’t be developed until thousands of years later.

Physicists and cosmologists have been working with the big bang theory since 1927 when Georges Lemaître, a Belgian physicist and Roman Catholic priest, first proposed that the universe was expanding. Then in 1931 he proposed that if projected back in time the entire universe would have expanded from a “primeval atom” also known as a singularity.

There was a problem with the Big Bang Theory though. The initial state of a singularity caused all sorts of unresolved problems for the physics. But in the 1980’s a new theory was developed based on readings from the CMB Cosmic Microwave Background radiation. This new theory is called Cosmic Inflation and replaces the singularity of the big bang with an exponentially expanding bubble in the quantum field of the void. As this bubble expands it creates the universe, and possibly other bubbles create other universes as well. The addition of Cosmic Inflation solved many of the remaining problems with the Big Bang Theory.

Taoist – Tao in this context is synonymous with Wuji or the infinite undifferentiated void. This void gives rise to the Taiyi or Great One which is the point of origin of everything to come from the void.

Modern – In the inflation theory of modern science the void is an infinite undifferentiated quantum field. A quantum fluctuation within this field gives rise to an exponentially expanding bubble that will form our universe (possibly one of many).

Taoist – The Taiyi differentiates into the two opposing forces of Yin (negative) and Yang (positive).

Modern – When inflation ends the quantum field decays giving rise to the forces and elementary particles of nature, including protons (positive) and electrons (negative).

Taoist – The forces of Yin (negative) and Yang (positive) combine together into the Taiji (great polarity) and the flow between them is Qi (vital energy) which permeates everything.

Modern – As the universe cooled protons (positive, along with neutral neutrons) combine with electrons (negative) and form atoms, the building blocks of all matter.

Taoist – Taiji and Qi then create everything else, represented in the above diagram as the Bagua (eight trigrams).

Modern – Over the ensuing eons, gravity condensed the atoms into stars, planets, solar systems, galaxies and everything else.

[NOTE: The Bagua is composed of the Taiji symbol surrounded by the eight trigrams. Interestingly, the trigrams are represented by sequences of three Yin/Yang lines (broken or solid), which are three bit binary numbers, millennia before the binary number system would be revisited for use in modern computing. The Taoist I Ching also uses 64 hexagrams which are six bit binary numbers.]

Taoist – All things are composed of the interplay of the forces of Yin and Yang whose flow is the vital energy, Qi. Qi is used to regulate the Yin and Yang which must be properly balanced to achieve harmony.

Modern – All matter is composed of atoms, which are positive nuclei orbited by negative electrons. Einstein’s theory of relativity further showed that all matter is really just a stable form of energy with his famous equation: E = mc2.

So while these two theories of cosmology are certainly not identical, they are surprisingly similar, considering one was conceived with nothing but meditation and intuition while the other took millennia longer and all of modern science and technology to conceive. What is most fascinating however is that the more sophisticated that modern technology gets and the deeper modern science delves, the closer they seem to get to the ancient Taoist theories.

While Wu Chi is the beginning of literally everything, it is also the first position in many Qigong (or Ch’i Kung, pronounced Chee Gong) exercises. That is what led me to investigate the deeper meaning behind it as I explore the path of Qigong. Stay tuned for my next post Wu Chi (Wuji) Standing Meditation the First Position in Qigong!