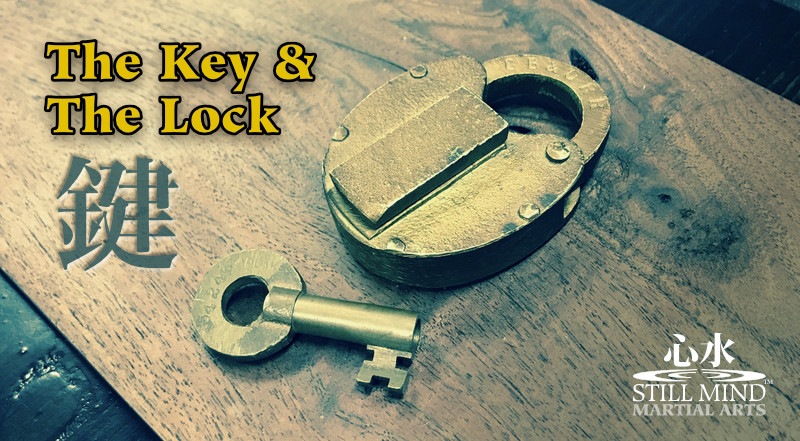 The idea for the following parable came to me while I was in Qigong meditation one early morning. As I stood silently outside in the warm sunshine and cool breeze holding a Zhan Zhuang position, the mental image of being handed an ancient key and searching for the lock sprang forth. So, I fleshed out the following little story along the lines of the zen parable of the empty cup.

I thought this may prove useful to share here on our Still Mind Martial Arts blog.

One day long ago, a highly accomplished martial artist had reached the limits of his training. He desired to break through his current limits to reach new heights. So, he set off on a quest. He journeyed far and wide in search of a martial arts master who could teach him deeper secrets to unlock. After searching for over a year in vain, he finally came upon a very old master who he hoped had such secrets to reveal.

He approached the master and demonstrated his best martial arts techniques and forms. The master watched in silence. When the demonstration was finished, the master simply walked away, leaving the martial arts student standing alone in confusion. After a short time, the master returned holding something in his hand. He reached out and handed the student a very old key. Without saying a word, he again walked away. The student waited for quite some time, but the master did not return.

The confused martial arts student examined the key he had been given. The metal was cold, hard, and it felt very heavy as he turned it over in his hands. It was so battered and worn that it appeared to be well used and quite ancient. The student figured that the ancient key must open an ancient lock. But where was the lock? He waited a while longer, and when it was obvious that the master was not going to return, he set out on a new quest, to find the ancient lock.

The martial artist searched high and low for the lock. After more than a year of searching in vain, he angrily returned to confront the master. When the master came out to see him again, he told the master that he had searched everywhere he could think of and found no lock. He accused the master of sending him off on a wild goose chase and then proclaimed that no such lock exists.

The master then spoke soberly:

“So, you have not found the lock anywhere you looked.”

“Does that mean the lock does not exist, or that you have not looked in the right places?”

“Does that mean that no one else could ever find the lock and open it?”

“Does that mean that everyone who says they have found and opened the lock, is lying?”

“That key has been well used and passed down for many, many generations.”

“So, which is more likely; that no such lock exists, or that you have just not found it yet?”

“There are many such keys left behind throughout the ages. It is up to you to find those keys and the locks that they open. And then open them. Or not.”

With that, the master turned and left, never to be seen again by that highly accomplished martial artist…