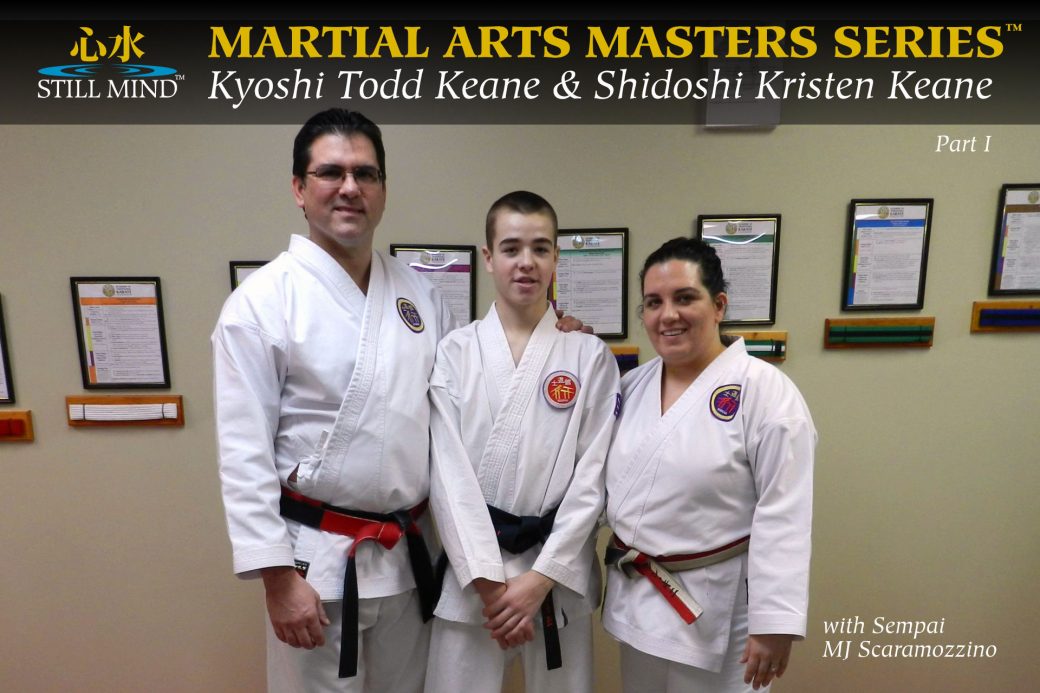 Both my father and I train at the Academy of Traditional Karate in Wilmington Massachusetts. We have been training there for about 16 years and over that time we have realized that it is a cut above other martial arts schools. The owners, Kyoshi Todd Keane and Shidoshi Kristen Keane, have set up a world class dojo that spreads the traditional art of Karate-do. I had the honor to interview them for the first in our upcoming series of Still Mind Martial Arts Masters™ interviews and profiles. (Image: Posing with Kyoshi & Shidoshi at my 2016 Shodan Promotion)

In terms of what differentiates the Academy of Traditional Karate from other dojos, Kyoshi Todd Keane says:

“We are, as it states in our name, a traditional dojo. Traditional dojos are rarer and rarer nowadays.  There are a large number of them around the world, but in our area [New England] there are very few of them. We strive to be a family dojo that has a holistic approach, balancing mind, body, spirit. If you look at our four stripes that we have for our curriculum, we have kihon (basics), and drills where we work with someone else. We also have our traditional forms. Additionally, we have our character program which is a differentiator. Not many people have formal character programs. For a lot of people it is by osmosis and just a byproduct of training.”  Lastly, we have our physical conditioning and practical self defense. Which you can do somewhat of a traditional style and not learn practical self defense. Some people do more of just an art form and emphasize just the aesthetics, but we have a nice blend all of those components.”

“On top of all that, we try to keep true to one particular style of karate, Matsubyashi Shorin Ryu, even though we do offer other things.  We also try to keep as pure to the kata as we can, and that is also very rare today.”

Kyoshi answers the next question about what the key aspects of a traditional dojo are.

“As far as key aspects, you have everything from the white gi, the kata practice, the yakusoku kumite practice (agreement drills) and bunkai (analysis and application of form). We have a heavier emphasis on that side, as opposed to just a freestyle jiyu kumite, which there are some positives to, but we are not a tournament school. You know, training hard and heavy is good, but sometimes that gets to be a little bit more of an ego driven or tournament driven type of a thing.”

“A lot of people when they meet me said ‘do you compete?’ No not now. But that is what they think it is, they think of The Karate Kid, and competitions, just like in every other sport. They consider it to be a sport not an art form or martial art, and there’s nothing wrong with that. You know, we do some of that too, but we are more about the perfection of the self, as opposed to collecting trophies.”

The next question was; How has the Academy been able to continue operation during the pandemic? This is what Shidoshi Kristen Keane had to say:

“That’s a really good question. Think about it like a sparring match or a class that you’re teaching, and that’s kind of how we worked our way through it. The rug got pulled out from underneath us and our normal way of doing things, our “systems,” if you will, all had to change. So, it was a complete pivot. We’ve remained flexible, and I think that training in karate all those years has really helped us to be able to do that to be quite honest. We just had to look at it and say, we got a problem here, right? This is a major challenge; and how do we make it work; by thinking out of the box a little bit and saying,  of course we can do this online. Given all of the technology that is available to us, we are so lucky that this happened in 2020, and this didn’t happen in 1990. If it was 30 years ago, what would we have done? We wouldn’t have had an option.”

“So as far as being able to continue and do that, we had a very short amount of time in which we pivoted and turned around. We didn’t sleep for the first four weeks. We were almost up 24/7 and that’s not an exaggeration. It was stressful, it was a lot, but you know we were up and running online in less than 48 hours from the time that we found out we were gonna have to shut down. So it was a pretty quick turn around. Honestly, your dad, Renshi Mike, you know over the years obviously helping to make our website so robust and we are used to referring people to our website.”

“We have all of our kata, terminology online. I think that went a long way in helping our students, because the majority of them have at least done kata online with us.”

“Thank God we did put all those videos up, I know we talked a lot over the years about that, yeah we just couldn’t have done it otherwise. Every class I’m teaching this month, like today, I’m just pulling up a video and saying here look at this and its a great resource.”

The next segment of the interview details what they view as the most challenging aspect of running a karate school in general.

“A lot of folks ask that, and a lot of people do martial arts as a hobby too. So there is a real distinct difference between a business and just group training if you will. And being able to marry the business side with the traditional side was a bit of an art form in itself. At least for us, because we always tried to keep the sanctity of our dojo, when we are on the floor we are there as sempai/kohai, teacher/student. You know we are totally focused on passing down the art of shorin ryu karate and not mixing in the “business” side and being concerned about if we have the rent, and all the things that go into play when you’re running a business. There is definitely a fine balance between the two. Also combining the two together and saying; well to be a disciplined, hard working martial artist you have to be able to say there is value to what I’m giving and there is a monetary exchange that allows us to hire folks, and all the other teachers that we have, so that we can provide an excellent service.”

“I think first and foremost in running a school and making it successful and what makes us really different is that we do teach traditional karate and we are not a fad-based program. If you came and you trained with us 32 years ago, we taught you the same information. And that’s a good thing. We are teaching a classical historical martial art. Some of these katas are so old like Chinto and  Kusanku and we are bringing that forward. I think that is one of the things that makes us real special is that teaching self discipline, honor, integrity, confidence building, and respect; that is bringing it all together.”

“Karate is a vehicle to teach that character development side, but I think that is what really makes us special and that’s why we are able to have a successful business because there is significant value in somebody becoming stronger in their character, stronger in their mind and their body, and those results are tried and true.”

We hope you enjoyed the first part of this interview with Kyoshi Todd Keane and Shidoshi Kristen Keane. Stay tuned for part II of this interview and future installments of our continuing series of Still Mind Martial Arts Masters interviews and profiles.

Michael J. Scaramozzino is a Nidan (2nd degree black belt) in Matsubayashi Ryu / Shorin Ryu karate and a Shodan (Black belt) in Kobudo (Okinawan weapons). He also practices Tai Chi. He holds the teaching rank of Waka-Sensei (New Teacher). He has been training since 2004.