Yakusoku Kumite II shows how to yield to set up attacker for counter strike and introduces the principle of conditioning or setting up the attacker by initially yielding to lure him in while recognizing a repetitive attack. Then when ready to counter attack becoming as impenetrable as if he is running headlong into a brick wall. This set also demonstrates the use of a simultaneous block and strike for the final counter strike. This Yakusoku Kumite II video study is a quick breakdown and analysis of the second set of the Yakusoku Kumite fighting drill. The above video shows both full speed and slow motion versions of two different interpretations of the set being practiced. First I give a relatively formal defense version followed by MJ who gives a more natural defense variation.

Attacker steps forward right in zenkutsu-dachi and throws a right punch (oi-zuki) to the solar plexus.

Defender steps back right to zenkutsu-dachi distance and slides the front left foot backward to adjust to the distance of the incoming attacker while performing a left low block (gedan-barai-uke).

Notes: Depending on how deeply the attacker steps in the defender’s stance may vary from zenkutsu-dachi to shizentai-dachi. The defender is stepping back and shuffling to yield ground to the attacker and maintain their distance.

Attacker steps forward left in zenkutsu-dachi and throws a left punch (oi-zuki) to the solar plexus.

Defender steps back left to zenkutsu-dachi distance and slides the front right foot backward to adjust to the distance of the incoming attacker while performing a right low block (gedan-barai-uke).

Notes: Depending on how deeply the attacker steps in the defender’s stance may vary from zenkutsu-dachi to shizentai-dachi. The defender is stepping back and shuffling to yield ground to the attacker maintaining the same distance.

Attacker steps forward right into zenkutsu-dachi while preparing to throw a right punch.

Defender steps back right (slightly off-line to the right) planting right foot for zenkutsu-dachi and winds up his body in preparation to block the developing punch while preparing a simultaneous shuto.

Notes: On the first two steps the defender is yielding and giving way to the attacker, luring him in. On the third and final step the defender plants his back foot and digs into a zenkutsu-dachi shifting all his weight forward and the attacker, expecting more yielding, instead crashes headlong into a solid defender as if hitting a brick wall.

Defender sinks into zenkutsu-dachi projecting his weight/power forward into the center line of the incoming attacker. He blocks the incoming punch with a down block (gedan-barai-uke) while simultaneously striking the side of the neck/jaw (shuto-uchi). Be careful to pull the shuto strike short so as not to injure your partner. The side of the neck is a vital area.

Notes: It should feel like the defender is giving way, giving way and then stopping and planting before dropping the hammer by firing a simultaneous block and strike to stop the attacker short. By shifting slightly offline and planting at the end the defender really destroys the attacker’s balance by attacking at an angle other than the forward angle the attacker was stepping along. Drive this simultaneous block/strike combination from the core. Unwind your body from the hips through the shoulders into the arms in a single unwinding whipping action. 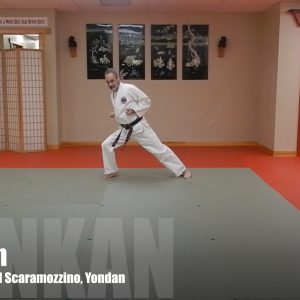 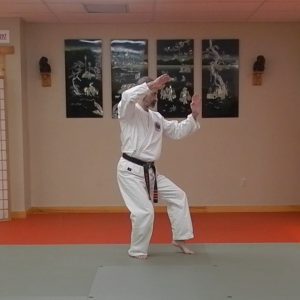 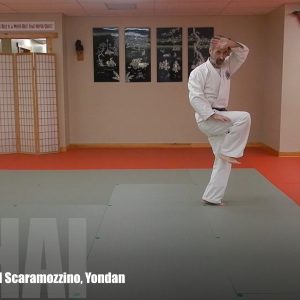 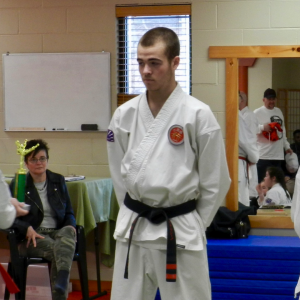 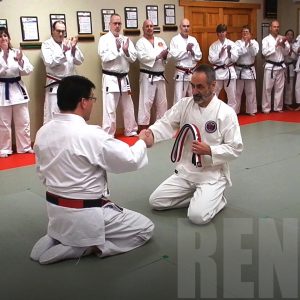 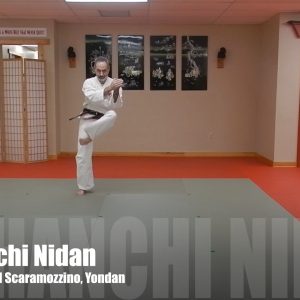 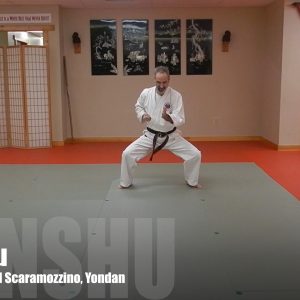 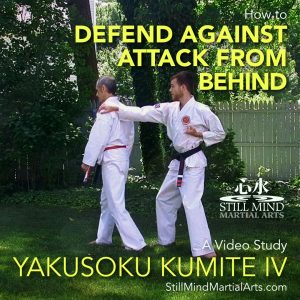