Sempai MJ and I videoed the full series of Yakusoku Kumite I-VII prearranged fighting drills. I then cut each individual drill into a separate video including both full speed and slow motion versions of the drill. I also created a complete step-by-step freeze-frame photo breakdown with descriptions and tips for each of the seven drills. Check it out!

Below is a previous demonstration that we videoed as part of Sempai MJ’s Joshu Hachiban (8th Degree Jr. Black Belt) promotion back in 2015.

The Storied History of Yakusoku Kumite

Yakusoku Kumite I-VII is a set of seven prearranged fighting drills. They were created by O-Sensei Shoshin Nagamine, the founder of Matsubayashi Ryu – a form of Shorin Ryu Okinawan Karate. He developed the Yakusoku Kumite with the teachings of his teacher Choki Motobu in mind. He based them on seven principles:

The following excerpt from O-Sensei Shoshin Nagamine’s book The Essence of Okinawan Karate-do provides insight into how Yakusoku Kumite I-VII should be practiced.

Prearranged kumite must be practiced as a life-or-death match, but never with the intention of harming the fellow practitioner. In kumite you must commit yourself totally, and from this commitment arises the realization that your blow could easily kill your opponent, that the karateman holds life and death in his hands. But you must never engage in prearranged kumite with the intent to kill. The realization that you hold life and death in your hands should lead you to the reaffirmation of life — your own and your opponent’s.

Here is a great Yakusoku Kumite article that I came across during my online research that discusses the history and creation of Yakusoku Kumite by Shoshin Nagamine at least twenty years before the publication of his book. The Article is by Sensei Andreas Quast at his awesome ryukyu-bugei.com.

Short Excerpts from the Article Translation

Sticking to kata only cannot be called true karate. As I have always said, kata and kumite are like heaven and earth, like the sun and moon, like the front and the back side of things, which are perceived as dualities when in fact they are inseparable. And therefore kata and kumite must be studied complementary to each other. That is, the various techniques interwoven into the kata must not only be practiced theoretically against a ‘virtual enemy in the air’, but specifically as an applied practice against an actual live human being. By way of trial and error, a personal combative experience is accumulated and finally brings about reflexive techniques of offense and defense at will. This is the final goal of karate as a bujutsu.

Here is an excerpt description of Yakusoku Kumite V. Note that it looks like the English version of the book has a slight mistake in this description. The English version has the defender take a zenkutsu-dachi, but Andreas translates the Japanese version as specifying a naname-zenkutsu-dachi. Though he says to “Seize his arm with your left” but the photos show you grab with the right hand while kicking.

The opponent delivers a right thrust from a left forward-bend stance (zenkutsu). Evade into a slanted forward-bend stance (naname-zenkutsu-dachi 斜前屈立ち) and stop the blow with your right forearm. The opponent immediately follows with a right kick. Transform into a crossed-leg stance (kōsa-dachi) and nimbly sweep it off. You and your opponent both perform one rotation until you face each other again. The opponent at full risk comes forward with a right middle-level thrust into a right forward-bend stance. Seize his arm with your left, and as the decisive technique deliver a kick to the vital point (‘lighting,’ tenkō 電光) at his abdomen in front of the kidneys. This is an application of preceding paragraph 6.

Check out Sensei Andreas Quast’s full article for much more, and be sure to bookmark his ryukyu-bugei.com blog which contains decades worth of valuable information!

Shoshin Nagamine created the Yakusoku Kumite sets based on the teachings of his Sensei, Choki Motobu. Sensei Andreas Quast has also translated, along with three generations of the Motobu family, one of Choki Motobu’s original Japanese books about his karate style Motobu-ryu: My Art and Skill of Karate.

Below are a number of different videos showing Yakusoku Kumite from around the web. This range of samples show variations in patterns, timing and emphasis from different Matsubayashi Shorin Ryu practicioners around the world. Enjoy!

Despite the low resolution and poor lighting in these videos, it is fascinating watching O-Sensei Shoshin Nagamine in the 1960s and his son Soke Takyoshi Nagamine in 2010 performing Yaksoku Kumite, generations apart.

Here’s a detailed step-by-step freeze-frame breakdown and analysis of Shoshin Nagamine’s early evolution of Yakusoku Kumite as seen in the first two of these videos. [Note: The first two are embedded facebook videos. If they don’t appear you may need to disable browser plugins such as Facebook Container which may block embedded videos.]

Sensei Gary Christensen and Sensei Jason Pennell of Shorin-ryu.ca give a very powerful performance of Yakusoku Kumite #1-7. Check out their blog for much more quality karate and kobudo content!

This DVD sampler includes quick clips of most of the moves for quick reference. While I haven’t seen the full DVD it certainly looks helpful. The DVD covers not only the history and traditional version of the kumite, Sensei Jerry Figgiani, 8th dan, explains and demonstrates applications and variations that can be applied to realistic self defense situations. His DVD’s look interesting, check them out!

As seen in the first video, Sensei Jim Sindt has a widely distributed set of videos that cover the 18 Matusbayashi Shorin Ryu kata as well as the 7 Yakusoku Kumite fighting drills. His speed and fluidity is very inspiring! The second video is Owen Masters in Sensei Zenko Heshiki‘s dojo in the 1970s. Owen demonstrates the traditional set of drills along with some interesting variations.

Ms. Lara Chamberlain discusses key points for Yakusoku Kumite #1-7 as two of her senior level students demonstrate. Ms. Chamberlain started practicing Matsubayashi-ryu karate in 1985. She was a dedicated student of Shoshin Nagamine, Takayoshi Nagamine, and Yasuharu Makishi. All of her videos are an effort to share all of the teachings she has received over the years. In 2019, she founded Tiida-ryū (Tenyō-ryū). Check it out at sczenkarate.org.

The magazine article shows how he continued to refine his Yakusoku Kumite even after he had published a version in his book. Let’s take a look to see how this demonstration compares to the Yakusoku Kumite information from Shoshin Nagamine’s book: The Essence of Okinawan Karate-do.

In this demonstration of Yakusoku Kumite II, Shoshin Nagamine clearly steps his right foot offline to the right while performing the final counter strike from a side-ward angle. In the book he steps straight back and remains inline in front of the attacker for the counter strike. This shows that Shoshin Nagamine continued to refine his Yakusoku Kumite even after the publication of his book because this demonstration took place well after the publication of his book.

This demonstration of Yakusoku Kumite III appears to be the same as shown in the book. The only difference is that the attacker and defender have switched sides so that you can see the moves from the front side of the defender, rather than the attacker as seen in the book. So, these photos are a nice complement to the photos in the book.

This demonstration of Yakusoku Kumite V is very similar to that in the book. The main difference appears to be that it may not have been quite as cleanly posed. The hook stance is missing in the third step which could be due to the timing of the photo. In step four they both turn counter-clockwise, back-to-back as in the book but again the timing may be different. It appears as if the attacker has turned faster and is already assuming the fifth position where the defender has turned slower and is still starting the counter-clockwise turn. 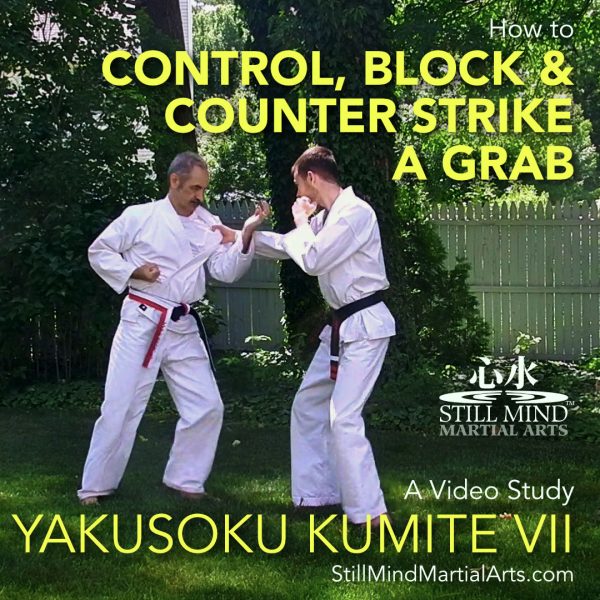 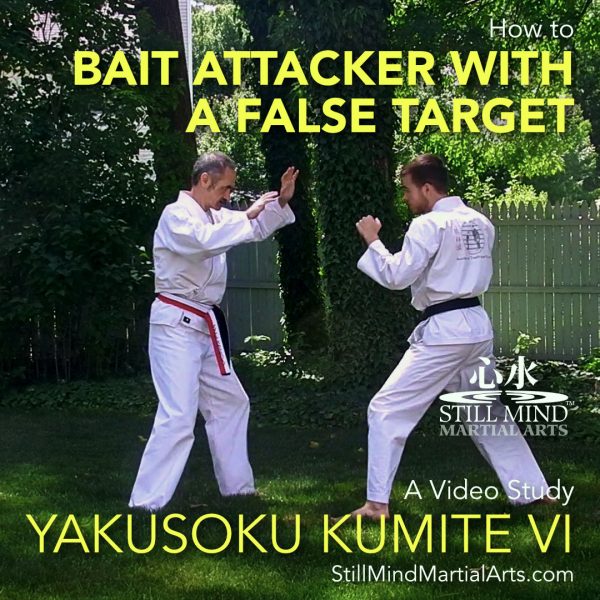 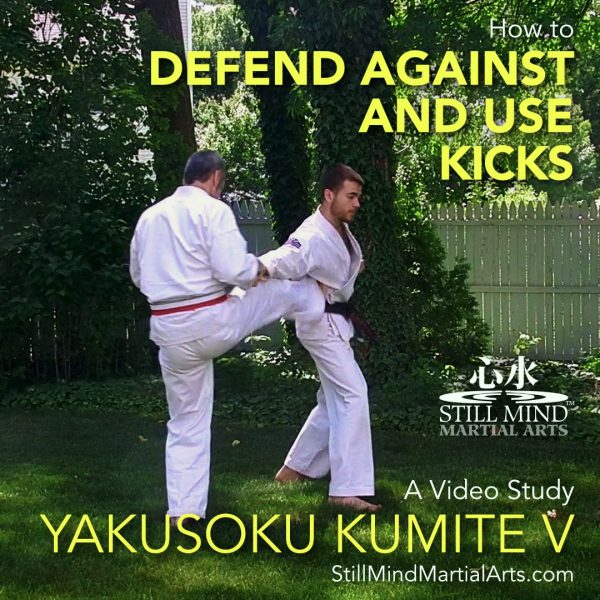 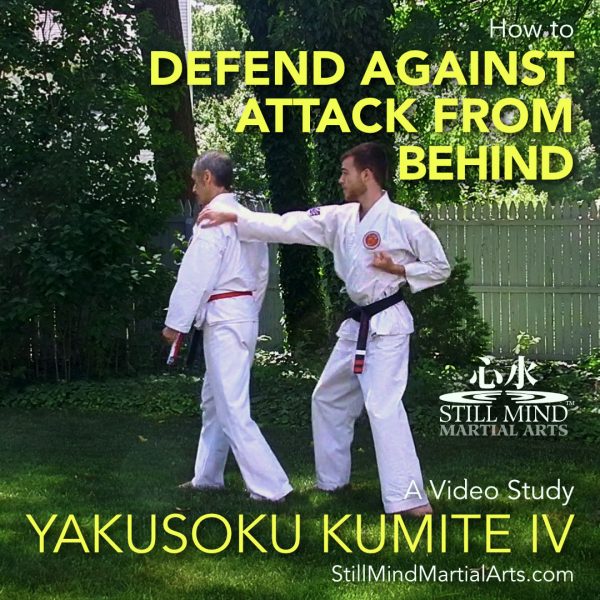 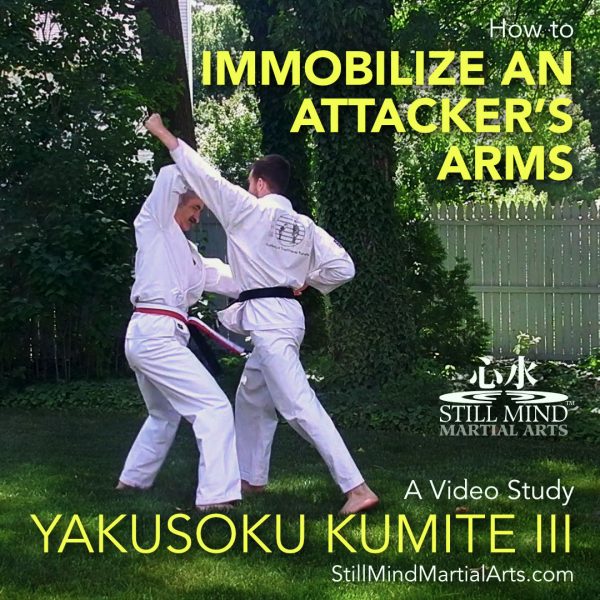 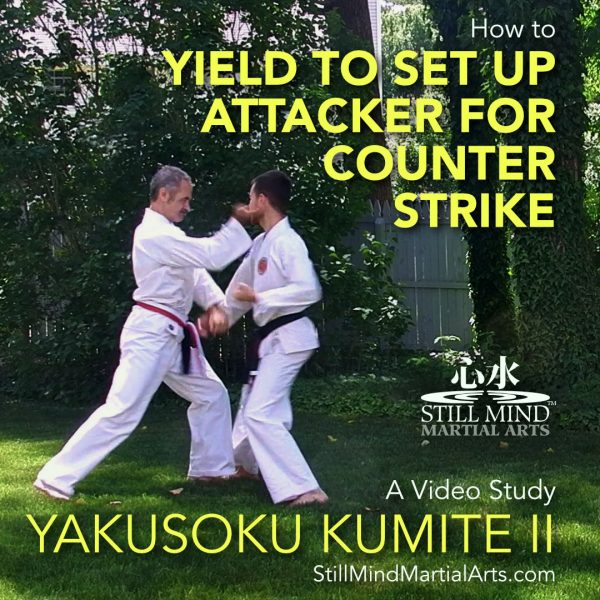 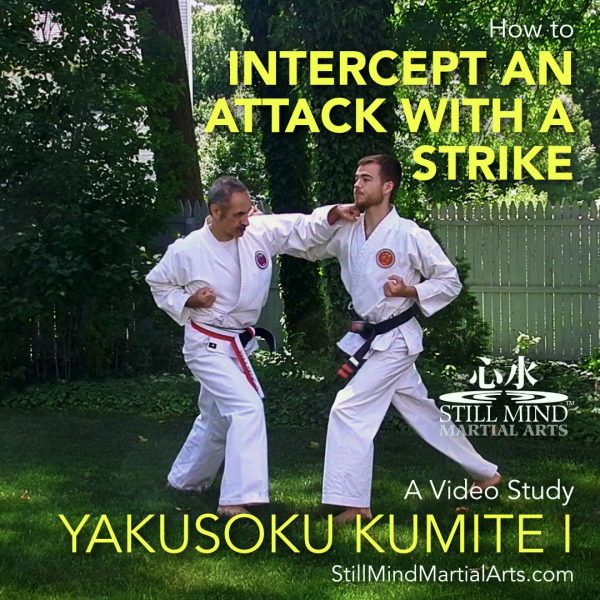 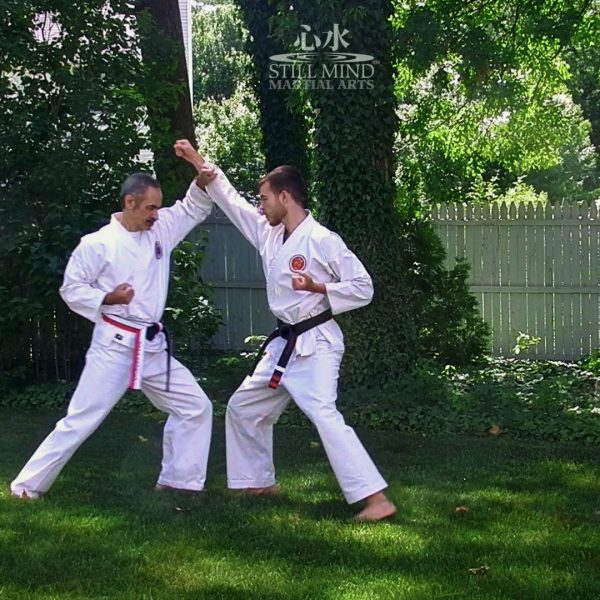 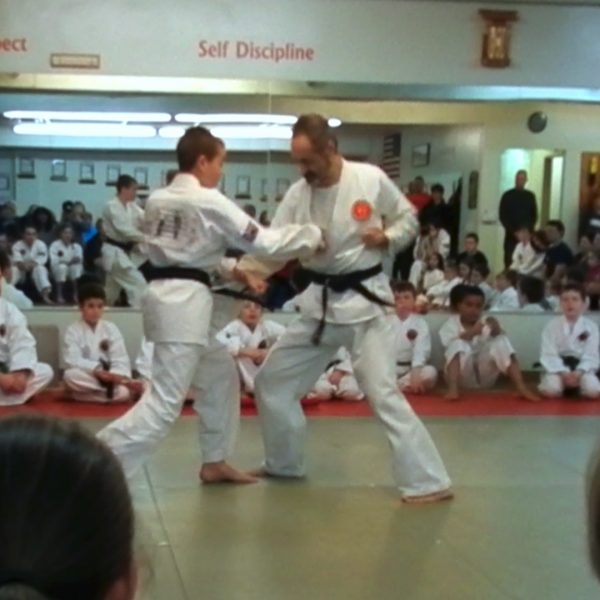