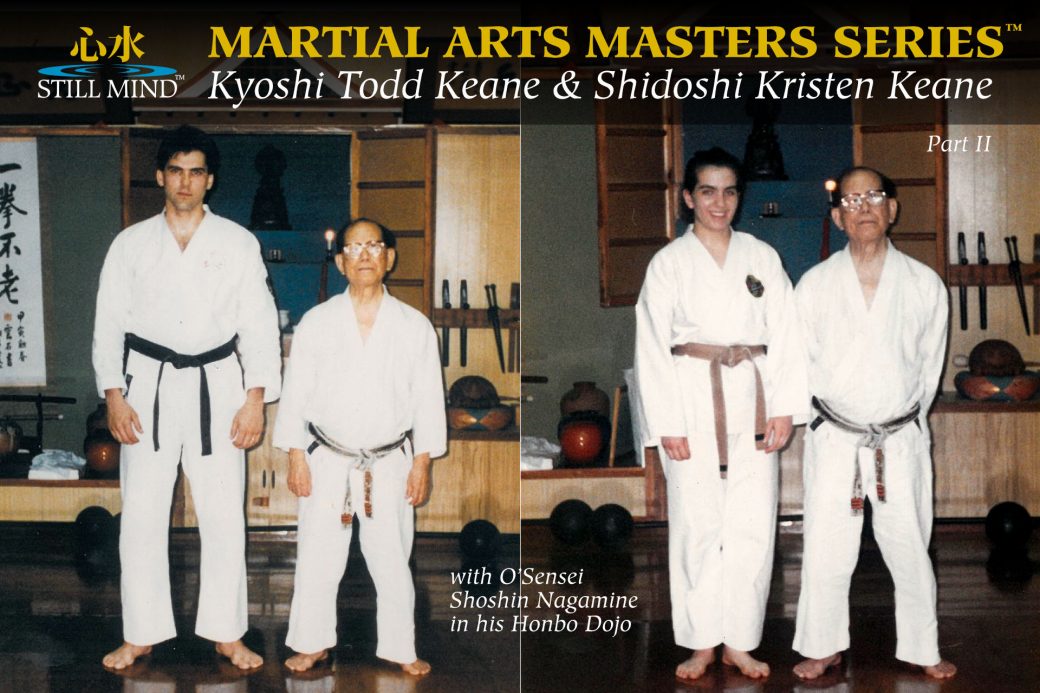 This is part II of our interview with Kyoshi Todd Keane and Shidoshi Kristen Keane which continues where the part I interview blog post left off. (Image: Kyoshi & Shidoshi with O-Sensei Shoshin Nagamine in his Dojo in Naha Okinawa)

How did the academy come up with its curriculum and how did it change over the years?

“When I started there wasn’t a curriculum.  You did learn katas, but the rest was kind of random.  There wasn’t a manual where they told you you had to do all of these things. It was an association, and it was inconsistent. So one person would know twenty katas, one person would know five. There was no real quality or consistency or anything like that, so it was a bit of a disaster.”

“I had come out of graduate school, business school, very structured, business analyst so I was used to breaking things down and passing stuff off, so I thought it was kind of crazy that people didn’t even know what they were supposed to work on. There was no material, there was no syllabus. So I said, well, we need a syllabus. I just put it on the wall and said this is what you got to do, to give you a guide. I don’t know really a school back then that really had that. They had bits and pieces of it.  We built it to be structured and organized.”

“Also, a more practical reason for this was, if you are going to teach lots of people, how are you going to remember what you’re working with them on unless there is a curriculum. I am the one in my own association that came up with the whole stripe program. We didn’t have that, we had white, green, brown, and black belt. Brown was sankyu, nikyu, iikyu. There were kyus, but there were ten levels and three colored belts and two stripes. So I needed to break it down and then I started to look at, I would love if people would teach me this history and culture. Sometimes people would, you would go to a camp and people would sit down and talk to you but there was no systemized way in which it was being taught.”

“When I’m teaching, I can make sure every student gets the material they need.  Also, We systematically teach character and culture. I didn’t know of anyone who even systematized even the physical conditioning, that wasn’t even something that was out there. Nobody had 50 push ups or anything like that, they would just have you working hard.”

“The kata piece was another one where, when I started, there were dozens of katas for black belt. Then, when I went to Okinawa, they had 7 and I was like, hmmm who knows better? I decided to take the advice of the Okinawan and go with 7, and you see how hard it is for people to master those 7 over 4 or 5 years. It turned out to be a good path to follow. Even with the basic, white stripe material, for instance, a crescent kick or something like that, maybe in class the guy taught crescent kicks, or maybe he didn’t, but you didn’t know you were going to learn it or if you were ever going to learn it.”

“Now, if you had gone to college you would know that if you are going to graduate with a degree in medicine, engineering, software development, you would expect to know certain basic pieces of material. That is the way I thought it should be. That doesn’t mean that you can just check boxes, because first you need to get the material, and that’s the quantitative side if you will.”

“Then, qualitatively it’s up to the teacher, and what I end up being is the quality control person. It’s very easy to say. oh yeah that’s good enough. No, you are cheating the person. The worst thing you can do is be easy on someone. It doesn’t mean you have to push them too hard when it doesn’t make sense, but often people don’t look at the long term. I don’t look at it as if I’m just working with a student for one day. I look at it like this, it’s a person and I’m trying to help them. I’m in it for the long hall.”

“The last thing I would say is we made a commitment in the dojo long term, and that is why we have always asked people for commitment.  One thing I learned from Buzz Durkin, a 10th degree Uechi black belt is if you want students to commit to you and their training, you have got to make that same commitment.  So, I signed a 10 year lease, spent a lot of money, changed careers, didn’t know it was going to work. There wasn’t any professional organizations but I believed in myself and I was passionate, I wasn’t going to fail.”

“The curriculum is a big part of it, and the other part is managing the people, and getting quality people. Not just technically, but people that want to really help students. Just take Shihan, yesterday he was out to three or four different driveways, teaching kobudo in one, teaching something in another one.”

“When I was in my graduate school, MBA program, with a finance concentration, I took entrepreneurial finance and entrepreneurship. One of the things they went over is different types of enterprises. You could have a franchise, you could have a corporate business, you could have a small business, and you could have what’s called a lifestyle venture. A lifestyle venture is, you pretty much check out of regular society, and you do it because you have a passion for it. It’s just not the dollars and cents, it’s just who you are. I guess doctors could be that type of person and some other people as well. So I looked at that and said that’s what I want, I wanted to be happy. I wanted a lifestyle venture, something I could really dig into. I have been in the corporate world and I was fine with that. I could do that, I wouldn’t have had a problem with that.  I would have made a good living. But, if I also could do something that I actually liked, why not?  So a dojo, a proper dojo, I would say, if I could be so bold, should be a lifestyle venture.”

“Shoshin Nagamine, when I met him at 87, he’s living in the back of the dojo. He comes out in his pajamas, his family is back there and he has one little room and this is what he does. Now there are  millions of people doing Matsubyashi Shorin-Ryu all over the world. There are a lot of people in Okinawa that that’s their thing, that’s their life, if you will. They are going to keep doing it, it’s not like, well am I going to enroll for another month.  It’s just either I’m going to do it, or I’m not going to do it. It’s like the scene in The Karate Kid where Mr. Miyagi says, it’s either Karate do, Yes or Karate do No, not Karate Guess So.  The ‘Guess So’ types get squished:)”

“I ask people are you willing to make a commitment or is this just an activity for you for a while? And some people are just going to do it because that is who they are and it doesn’t matter if it’s me teaching it or if it’s someone else. There is definitely a blend of the business side, and you could call it the passion, but it’s really a lifestyle venture. Anything in the arts you will see that. If someone wants to be a painter, an author, etc. whether they make a living out of it or not all depends on whether they have the background. You could be a doctor and not make a lot of money if you don’t run your practice well. Now they tell doctors that they should get an MBA so they can manage it. It’s a very complicated business to be in. Trying to run a traditional dojo and maintain a successful business is just as complicated.   That is my take on how we look at it.”

You mentioned Shoshin Nagamine. We heard that his dojo had recently been demolished. Could you tell us a little more about what it was like when you and Shidoshi visited to train with him in his dojo?

“I read that they had torn down the old Hombu Dojo.  That is really sad.  It would have been nice if they made that a national shrine, much like they considered Nagamine Shoshin a national treasure.  It was a very simple structure, basically the size of a large garage with no windows, just the garage door that opened in the front.  It had a few Makiwara near the entrance and some old weight lifting barbells that were from the 50s.  The floor was finished plywood and there was plenty of sweat that was poured on those floors.”

“We found Osensei (Great Teacher) to be very humble and kind.  He was still active at the age of 87.  When we arrived, he was involved in a deep conversation with another elderly martial artists about various techniques. One vivid memory was his demonstration of how conditioned his forearms were still.  He smashed his forearm with his other hand using a Tettsui (Hammer Fist) and said “See, still strong.”   We were lucky to spend a few days training with him and one of his students, who also acted as a translator.  He would meditate, ramrod straight, for 45 minutes every morning.  While we squirmed after 15 to 20 minutes, he didn’t budge.  We were expecting him to be very critical when we performed our kata, but, to our surprise, he was very encouraging.  He would say “Dozo”, which in that context meant “Good” every time he liked something he saw.  He would occasionally make corrections or demonstrate bunkais (applications) to reinforce a point.  The lasting impression we had was that he was an amazing man and we would be honored to follow in his footsteps.”

We hope you enjoyed this interview with Kyoshi Todd Keane and Shidoshi Kristen Keane and thank them for taking the time to share their story with us. If you’re looking for a dojo in the Wilmington, MA area, come on in and check out their world class dojo – Academy of Traditional Karate!

Stay tuned for the next interview of our continuing series of Still Mind Martial Arts Masters interviews and profiles. Our next interview in the pipeline is with Hanshi Ron Martin, Captain of the first US Karate team and world famous tournament champion from the “Blood and Guts” era of karate.

Michael J. Scaramozzino is a Nidan (2nd degree black belt) in Matsubayashi Ryu / Shorin Ryu karate and a Shodan (Black belt) in Kobudo (Okinawan weapons). He also practices Tai Chi. He holds the teaching rank of Waka-Sensei (New Teacher). He has been training since 2004.