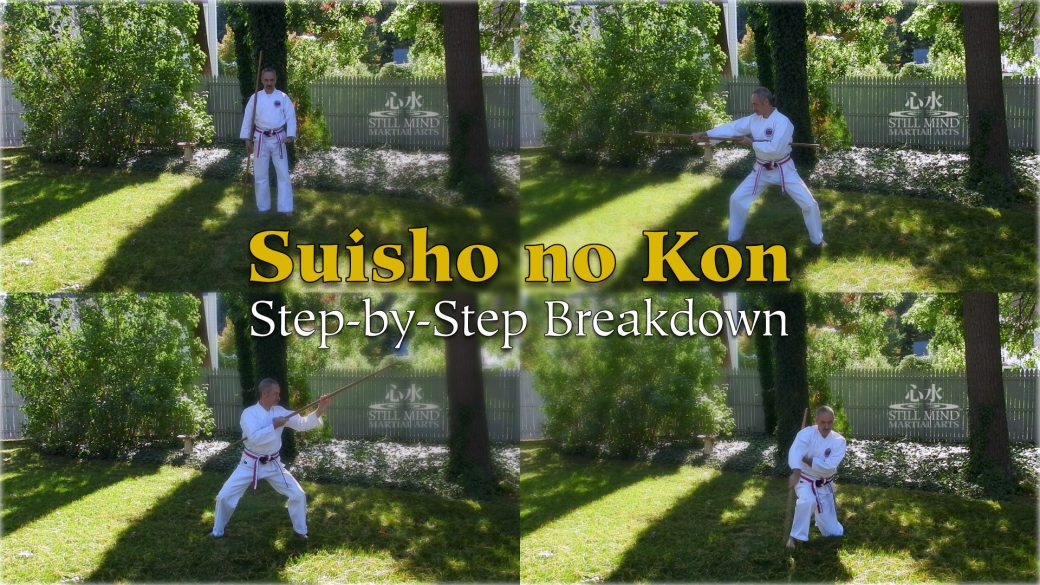 This post details the step-by-step breakdown of the previous kata video I posted, Kata Suisho no Kon. It uses a series of freeze-frames from the practice video to show each of the specific moves in the kata along with descriptions and tips. I also include a step-by-step PDF reference sheet that you may download and print. Along with the previous practice video, this should greatly help you learn and practice this intermediate bo kata as a supplement to your local instruction.

This kata begins in a Musubi-dachi (heels together) with Bo behind Right arm/hand. Then unwind into starting position and announce the name of the kata.

The following moves are done with a single step. Flow from one move into the next, but not just as if spinning/flipping the Bo around. Think of each move as a strike with power behind it. You may vary the cadence and pacing to place more emphasis on specific strikes to suit. I tend to emphasize the forward thrusts. Keep the horizontal moves all on the same plane and try to target the forward tip of the Bo to hit the same small target on each strike of the set.

Same as the previous set but with thumbs always toward the middle of the Bo without any hand switches. Also performing the strikes on the opposite side as previous set.

Same as the previous set but on the opposite side.

These side thrusts and pool cue pokes are done in a Shiko-dachi (Jigotai-dachi). Perform the side thrust with Bo horizontal to the ground. Perform the pool cue poke with the Bo pointed upward at about a 30°- 45° angle, as if striking an attacker on horseback. Trap the near end of the Bo under your arm in both cases.

Side thrusts to South/North in East facing Shiko-dachi. Perform the thrusts horizontal to the ground trapping the near end of the Bo under your arm.

From the East facing Shiko-dachi, step backward turning to face North into Zenkutsu-dachi. Perform the Left side block to the strong-side (the side of the forward leg) holding the Bo vertically.

These South/North side thrusts and pool cue pokes are done the same way they were to the East/West in 6A/6B.

From the West facing Shiko-dachi, step backward turning to face North into Zenkutsu-dachi. Perform the Right side block to the strong-side (the side of the forward leg) holding the Bo vertically. Same as step 8 but to the opposite side.

Side thrusts to North/South in West facing Shiko-dachi. Perform the thrusts horizontal to the ground trapping the near end of the Bo under your arm. Same as step 7 but facing the opposite direction.

This final sequence of moves is a series of alternating side and high blocks while retreating back to the final close position. All side blocks are performed with the Bo held vertically and the high block is with the Bo held horizontally above the head. Keep both hands relatively far apart with both thumbs toward the middle of the Bo.

The kata ends by rotating the Bo back to where it started and bowing out.

The following PDF reference sheet is a single condensed page to use as reference while learning and practicing the kata. It is useful to help you remember what all the moves are until they are committed to muscle memory or for review to remember them after returning to the kata if it hasn’t been practiced in a while. I had created this reference sheet when I was first learning the kata myself.